In her article, "Sharia Down Under", Judith Bergman exposes the values of Australia's Muslim representatives and creeping sharia.

She shows that the current and past 'voices' for Islam in Australia have values totally out of kilter with Australian social norms. Rather than building trust they sow division and thereby contribute to the growing anti-Muslim sentiment. Peace loving Australian Muslims need to do get rid of this mob and select better representatives if they are to be accepted by Australian society.
Posted by Grappy at 12:12 No comments:

Why did America lose the Vietnam war?

Oft said to be 20/20, history is a study in hindsight written by the victors. In today's highly polarized world even after 6 decades it is difficult to get an objective analysis of the Vietnam war. The common belief is that it was a war not worth fighting, that America had no business interfering with what was an internal matter for the Vietnamese, that the anti-war movement helped stop an immoral war.

I guess all wars are immoral, but fighting a war against military aggression is morally justifiable.

A recent Prager U video, Why did America fight the Vietnam War?, highlights some inconvenient truths about the war that are well worth noting.

This holds a sobering moral lesson for Americans with wars in Afghanistan and against Isis. The consequences of defeat or withdrawal are significant.
Posted by Grappy at 11:04 No comments:

Whites are NOT the most racist people

Contrary to widespread media portrayal Whites are not the most racist, bigoted people in the world. Well it may be a surprise but it seems that objective analysis puts the common perception to a lie.

Here is a short video clip by Ajay Fayza presenting the case. You can also link to it at "Whites NOT the most racist people on Earth"

No, your eyes don't deceive you. The only predominantly 'White' country among them is Russia, at number 20.


What is White privilege?

It seems collective "white Guilt' is widespread in America. The result no doubt of repeated claims by self named 'progressives'. But what is it? In this short video Horowitz tackles the concept of "White privilege" using interviews of the 'man in the street'.


Condemned by their own words, they stand naked.
Posted by Grappy at 11:07 No comments:

Some months ago I added the "On the Grapevine' page for sharing links to articles and videos that I found interesting. As a dedicated skeptic I tend to be contrarian, always looking for the alternative view, especially when I feel an idea is being pushed too hard. So my selections tend to be this same contrarian approach, although not universally.

There is a lot of very compelling material around. Rather than post these to a separate page, that may or may not be seen, from now on I will simply post them on the main blog.  I think that will make them more readily available.
The " On the Grapevine page" will remain as is, for now.

Also, given my recent interest in Energy technologies I will be launching an "Energy Frontiers" page highlighting new developments in Energy Technology. We live in an exciting era for technological change, and energy breakthroughs will in all probability transform our daily life.

I am sure I am not the only observer to be somewhat flummoxed by the new-direction 'Turn-bill' budget. My first reaction was rather stronger, but 'flummoxed' will do for now. I guess it will take some time to see where it leads, but for me it represents total capitulation on many long standing liberal values. While I appreciate the senate problem that has been used as justification for the illiberal measures, it does not explain the narratives used to justify these. Even if you wish to raise a levy on some banks, why the bank bashing? Liberals were once very proud of our world class banking system, so what has suddenly changed? Similarly the narrative surrounding the revised education policy is a total reversal of  what the LNP has been saying for some time.

Let's just look at education spending, now endearingly termed Gonski 2.0. While there is a potential political advantage in removing, or partially removing, a point of difference between ALP and LNP, it trashes the valid long standing LNP argument that increased education spending does not improve educational outcomes. 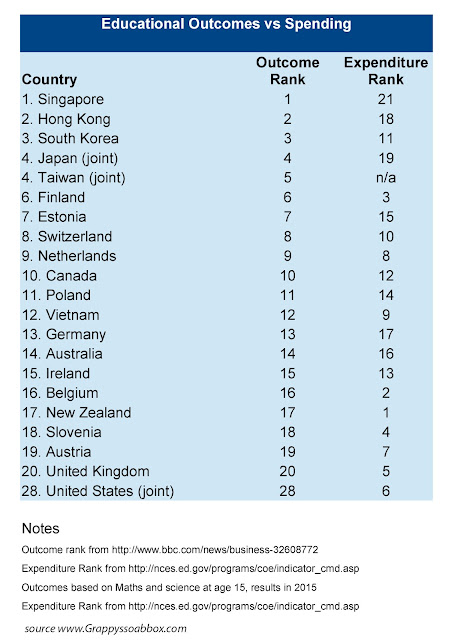 Given these inconvenient facts, how can any government justify increasing spending? Indeed, even if Australia had zero debt, and had money to burn, it would be a reckless politician who simply threw more money at a problem that has undoubtedly become worse despite more money.

What are the consequences?

By advocating the new Gonski 2.0 policy Turnbull and Scomo have; -

At the same time the proposed 'adjustments' have already been labelled unfair and have ignited a war with the Catholic education sector.

What could they have done?

Here are a few ideas for a start; -
The core principle underlying "Gonski" is that each child deserves the same level of contribution by State and Federal governments. This is hard to argue. Yet contrary to Labour, and now the Libs', interpretations this does not require additional spending, it just requires that current spending be adjusted to achieve that outcome. Of course it cannot be done at once, as any school suddenly losing spending would cry blue murder. It could however be a achieved by a series of incremental adjustments over some years. Over time the annual increases received by some schools would be lower than those of others. It would allow schools to gradually adjust to the 'fairer' distribution of public funding. No sudden changes, just incremental adjustments, and no cuts in absolute terms.

But even this incremental re-distribution is somewhat nuanced for today's "in" or "out" mentality, so for political reasons I would have avoided it, for now at least.

I guess this is one opportunity foregone for this year.  Given Turnbull and his team's unexpected abandonment of heretofore core LNP values, it seems sensible policy has been deferred for some time.

So we can all go and cry into our beers.

Whether you are a strong advocate or a mild skeptic, the focus on CC has spawned widespread research for efficient low cost inexhaustible, non-polluting energy. This research is gradually bearing fruit with advances in new technologies making headlines weekly.

From time to time I have highlighted some of these in posts (see What the Heck is Thorium?, What is LENR?), and will continue to do so.

In the mean time here is a list of recent articles on some of these new technologies;-

With the world's energy needs rising and the concentration of energy use on fossil fuels that threaten Climate change the rewards for any breakthrough are substantial. So it is no surprise that research in new technologies is pervasive.

Despite widespread efforts by the world community to counter climate change by limiting the use of fossil fuels, their use is still rising. Poorer countries are not willing, nor should they, limit the economic prosperity of their people by using more expensive renewable technologies. I believe it is unlikely that all the global agreements on limiting "Carbon pollution" will have the desired effect.

At the same time as soon as renewable energy is cheaper than fossil fuels there will be no incentives required to encourage its use and the world will rapidly convert.  I believe this is the most likely solution to the threat of climate change and will occur with in the next decade.

It happened just last night. Not for the first time and I hazard not the last. It started with a friend complaining about the unseemly argument he had faced with a group of Climate skeptics. He felt he had been assaulted by climate change skepticism. I have to confess I tend take a contrarian view whenever I am confronted by strongly worded statements. However in this instance, given I had limited time, I kept a neutral stance simply raising some questions. Discussions on Climate Change however tend to get emotional very quickly. Despite the casual way we had fallen into the topic and ignoring my body language hinting I wanted to be elsewhere, he felt a need to explain his position and in some detail.

The essence of his argument was indeed the simple one; -

"We rely on a range of experts in every part of our daily lives . We don't build bridges ourselves we let engineers do that, we don't do DIY home surgery, we let doctors to that, we don't represent ourselves in courts we use barristers to do that for us.. So why should it be different with Climate Change, we should rely on Climate Scientists"

And then came the clincher " 97% of scientists are telling us that CC is real and dangerous, so that should be enough for us"

These are indeed sound arguments, and, for those not willing to explore further, totally compelling. Who would go against the world's scientists. So if the claim that a vast majority of Climate Scientists believe in dangerous Climate Change is true, then it is sensible for people to accept the verdict and move on.

I am guessing he mentally filed me away as a skeptic. We'll see at our next meeting.

But is the claim true?

It has certainly taken prime place in CC debates especially by laymen when debating climate science, notably including the now ex-president of the USA Barack Obama and his secretary of state John Kerry.

But is it true that "Ninety-seven percent of scientists agree: climate change is real, man-made and dangerous"?

In their article in the WSJ (The Myth of the Climate Change '97%'), Joseph Bast and Roy Spencer present the history of the claims and demonstrate that it relies on proven falsehoods. But of course "A Lie Can Travel Halfway Around the World While the Truth Is Putting On Its Shoes". So we are stuck with the lie.

The article is well worth a read, if you can get through the paywall at the Wall Street Journal.

However if you cannot here is a summary; -
So where does that leave the layman?  Where laymen usually are just blowin' in the wind.