Is a solution to the world's energy needs just around the corner?

Over the years we've all heard such claims so you have good cause to be skeptical. My recent readings however, have made me stop and think. I happened to re-read an article first published in 1999 by Arthur C Clarke predicting the future 100 years.

Of the many interesting predictions what struck me most was his prediction, made in 1999, that the world's energy problems would be solved by Low Energy Nuclear Reactions (LENR) by, wait for it, 2002! That was at the time only 3 years into the future. Why would such a renown futurologist make such a dramatic prediction just three years into the future. I had to check it out. 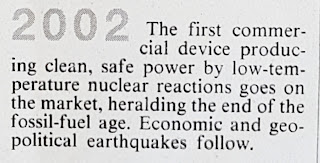 
So here is what I have gleaned over the past few days.

LENR is effectively Cold Fusion re-branded and though out of the limelight there is a lot of information out there.

It all started in 1989 when, you may recall, two well respected chemists Martin Fleischmann and Stanley Pons declared, with great fanfare, they had discovered Cold Fusion. The fusion power of the sun, and hydrogen bombs, replicated in a small laboratory experiments at near room temperature. Given scientists have been "just 30 years from a successful hot fusion reactor for the past 30 years", this was big news. Unfortunately after initial wide acclaim their results were debunked by the scientific community and Cold Fusion was relegated to crackpot science.

However it did not die. Many scientists continued the work and now after some decades it is making a very quiet resurgence.

While much of the material out there is a bit technical here is a video that explains the history and introduces the potential of this technology without requiring a technical background.