What the heck is Thorium?

Thorium is widely mooted as a safe and clean energy source with the potential to power our world. A one-stop solution to all our energy needs for thousands of years into the future.  Unlimited clean, low cost energy that could transform life on earth into the idealistic future of many a science fiction novel of yesteryear. Pretty wild claims.! Even if only partly true Thorium deserves our interest.

A colleague recently sent me some videos on Thorium and re-kindled my interest. So I thought I should revisit the subject.

I understand this subject can get technical very quickly,. however in this post I will only present a 'helicopter' view omitting as much technical detail as possible. The references section provides some links to further material for those interested.

So what the heck is Thorium and why is it important?

Following the relatively recent Fukushima disaster, nuclear energy has once again been viewed with suspicion. This is despite the world's need for alternatives to fossil fuels.

For nuclear power advocates it is unfortunate that we can recall every nuclear disaster even decades after the events (Three mile island, Chernobyl and Fukushima) while we ignore the all too regular disasters in coal mines. That is not to say that nuclear energy should be embraced without taking account of both its safety issues and the problem of nuclear waste.

Given the need for 'Green' base-load energy sources, we should not rule out nuclear energy without properly evaluating its benefits and its problems.

So lets look at some observations regarding our energy options; 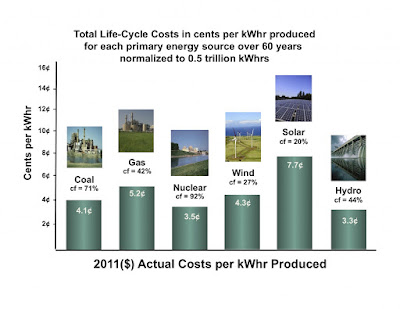 Total Life-Cycle Costs for Electricity, normalized to capacity factor, life-span and amount of energy produced. Costs include construction, operation and maintenance (O&M), fuel, and decommissioning. Costs do not include electrical grid upgrade, transportation issues, connectivity of renewables and buffering of their intermittency by rapid cycling of fossil fuel plants as presently practiced in this country, and externalities such as any carbon-tax, pollution and health care costs associated with energy production and use. Also, these costs are not levelized but are actual direct costs. Once actual costs are known, better long-term planning can be done and some levelizing factors can be wisely shaped to affect a more desirable energy mix.
(Source The naked cost of energy stripping away financing and subsidies)

The benefits of nuclear power 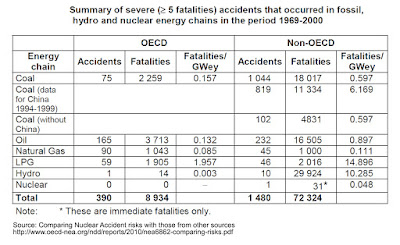 The problems with nuclear power

The accident statistics quoted above were before the Fukishima disaster which arguably claimed 1200 lives, although some claim none (see Ref [6]). This single incident has severely damaged the reputation of nuclear power.  There is considerable debate on the causes of the Fukishima accident; how it could have been avoided, why building the reactors near a geologically active site was precarious, the reactor design was old, and so on. No doubt some of these are valid arguments but it points to some serious concerns with conventional nuclear power.

The key problems of Uranium based nuclear power are; -
Each of these issues needs to be recognised and addressed before adopting a nuclear power option to a country's energy mix. Over the past 5 decades many countries have chosen to go nuclear, accepting the risks but deciding that they were offset by the benefits of low cost energy. Many other countries, perhaps without the same energy needs, have stayed on the sidelines.

Given the urgent need to reduce fossil fuel emissions, however, many countries are revisiting the nuclear option, and in the absence of technological breakthroughs in renewables, will without doubt build more reactors.

So is Thorium a better nuclear option than Uranium and if so why?

Let's look at the four key downsides of Uranium based nuclear power and see how they apply to Thorium reactors.

In order to appreciate the difference between Uranium and Thorium based reactors, we would need to take a look at reactor design.  However in keeping with my promise to keep this post as non-technical as possible, I have tabulated the main differences between the most common Uranium based reactors the Light Water Reactor (LWR) and the most commonly Thorium reactor design, the Liquid Fluoride Thorium Reactor (LFTR). (To make things confusing LFTR is often called the Molten Salt Reactor (MSR), but I will stick to LFTR here). For further reading please visit the references, especially the video links.


In particular LFTR has built-in safety because; -

A Thorium LFTR reactor is much safer than the Uranium based reactors.

Lets look at waste products, these occur both when mining the Uranium or Thorium and resulting from the operation of the reactors.

The graphic below compares the waste generated in the Uranium cycle to that of the Thorium cylce. 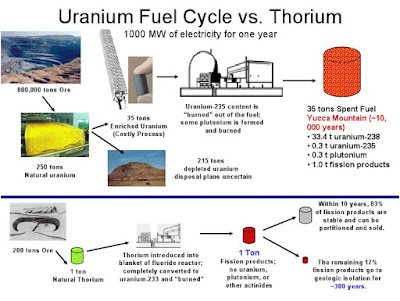 For the same energy output the amount of waste with Thorium fuel is orders of magnitude less than with Uranium.

Equally importantly lets look at the type of waste products produced. We know one of the critical issues with Uranium reactor waste is that the waste products remain dangerously radioactive for tens of thousands of years. 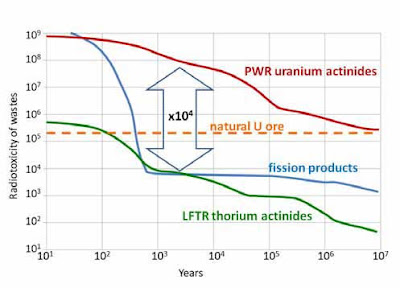 Uranium reactor waste PWR uranium actinides have radioactivity 1000 times greater than the natural Uranium ore and remain above the natural background for a million years. Not so with Thorium , the actinide wastes from LFTR are perhaps 10 x as radioactive as background Uranium ore when created but decay rapidly within a few hundred years.

So Thorium once again has it all over Uranium when it comes to waste;

Thorium is naturally much more abundant than Uranium (approx 4 x) but when compared to the abundance of Uranium 235 which is required for nuclear energy, Thorium's abundance is very much greater (see graphic below.)

The Thorium nuclear cycle is 200x as efficient as Uranium nuclear cycle. This is because in LWR only a small percentage (~5%) of the Uranium can be fully used as the fission products are embedded into the solid fuel rods. By absorbing neutrons these slow the reactor and eventually make the fuel rod unusable.   However in a LFTR because the fuel is a liquid, fission products are continuously removed from the fuel allowing all the fuel to be fully used. It is this process of removing waste from the fuel that is key to the efficiency of LFTR. It is also the reason LFTR generates less waste and less long-lived waste. As a result just 5000 tonnes of Thorium are required to generate all the energy currently used in the world in a year.

The above graphic shows the estimated availability and distribution of Thorium in the world.
Given a total availability of some 6 million tonnes, there is enough Thorium on earth to power our civilisation for over a 1000 years. After this, there is more Thorium all around us, on Mars, the Moon and Venus.

Perhaps the most dominant argument against nuclear power has been the threat of proliferation. Nuclear power generates weapons grade Uranium and Plutonium which can be used for various WMDs.

Thorium is not naturally suitable for nuclear weapons. Indeed if it were it would have been used extensively, as it is much more abundant than Uranium. Moreover given the efficiency of the LFTR there are very few waste products and NO Plutonium. Hence Thorium poses minimal risk with regard to nuclear proliferation.

However Nuclear power suffers from; -


Thorium nuclear power can also generate base-load power without CO2 emissions at even lower cost than Uranium based nuclear power.

Moreover the Thorium LFTR design addresses all the downsides of Uranium reactors.

Thorium LFTR ;-
For all these reasons Thorium seems to measure up to the hype. It holds the promise of clean low cost energy for an energy hungry world.

2. The naked cost of energy - http://www.forbes.com/sites/jamesconca/2012/06/15/the-naked-cost-of-energy-stripping-away-financing-and-subsidies/