With the recent release of the report Towards a Climate Policy Toolkit by the Climate Change Authority (CCA), the finger-waggers are at it again. Two board members of the CCA joined by vested interests and an unquestioning media, are once again demanding Australia sign up to greater reduction targets than the those made at COP21 some 10 months ago.

But are such calls justified? Certainly not! Since industrialization Europe, the US and China have contributed the most to global warming. So they have to contribute the most to mitigate the impact of their emissions.  Australia, and the rest of the world, have had smaller contributions and therefore their fair share is lower.

Yet, self-serving advocates and the compliant media seem to gloss over these inconvenient facts.


The greatest contribution to climate change since industrialization has come from the USA and Europe with significant contributions by China , Russia and Japan. (see graphic below.)
China is most notable for the speed with which it has become the largest annual emitter and a significant driver of global warming in its own right, despite its much more recent industrialization.

The historical contributions of just 5 countries, if you will permit me to call Europe a country, to global warming is approx 75%. Three quarters of all global warming (to 2011) is due to just these 5. One would therefore expect that the contribution to the mitigation effort should be commensurate. Quite simply if you caused 75% of the problem you should clean up 75% of the problem. You clean up your own mess. Well, let's see.

A vast majority of the pledges made at Paris were based on a nominated percentage reduction of GHG emissions below some baseline rate by a nominated deadline. The actual percentages and baseline dates vary but do not really impact on the problem. At first glance it may seem quite reasonable that each country makes commitments that reduce their own emission rates, especially if the reductions are of the same magnitude, and indeed most countries have chosen roughly similar reductions. So each country is effectively making equal commitments based on their own contribution. That's ok, isn't it?

But all Paris pledges are based on emissions rates as opposed to cumulative historical emissions.

And here is the problem. The large emitters, Europe and the US, and to a lesser extent Russia and Japan, went through industrialization a long time ago and have had high emissions for a much longer time. Their current annual emissions may still be high, but nowhere near their cumulative impact.

Lets look at the numbers. While the top 5 contributors to climate change represent 75% of cumulative emissions they only represent 50% of current emission rates. (see below) 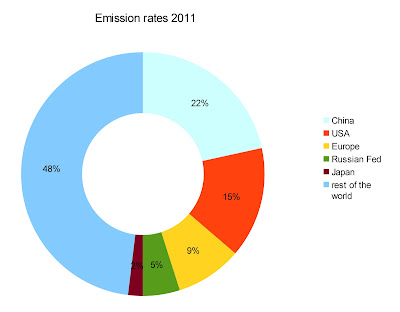 So pledges based on current emission rates will always favor the earlier industrialized countries.

But wait there is more

If that were not bad a enough there is a second problem.  GHG emission rates do not take into account the impact of imports and exports. The GHG generated in the production of goods is generally not included in the emission rates attributed to a country. So the producing country  has the burden of the emissions which are enjoyed by the consuming country. Countries like the US and Europe are major importers of high GHG products and therefore benefit from this error, while exporters like China bear the burden in their emission figures.

China is the elephant in the room

But let's not start feeling sorry for poor China. Yes, China can rightly expect an adjustment in their emission rates for the impact of exports, and it is not insignificant. It amounted to some 22% in 2005 and would, I guess be similar today (see my earlier post Seeking a fair GHG reduction target - Part 5: Who is responsible? which presents some of these figures with sources). However, even after adjusting for the exports error, China remains the largest annual emitter, by far. 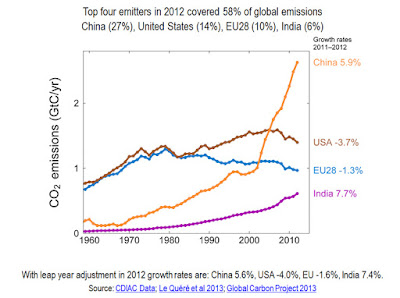 In any case, China has virtually opted out of any reduction commitments. It has agreed to decrease the carbon intensity of its economy by 60-65% by 2030. But it had already committed to a 40% reduction by 2020, and it seems its extended commitment is really 'Business as usual', requiring it to simply continue along its current path of building more gas/nuclear power stations than coal fired ones.

China has justified its stance on the basis that its industrialization is relatively recent and that it should be accorded the same 'free emissions ' that the rest of the industrialized world enjoyed over the decades. That too may sound like a reasonable argument, but the figures don't stack up. China's Emissions per capita is already equal to that of Europe and also rising fast. So it should increase the standard of living of its citizens as is the case for Europe with no greater emissions than Europe's. 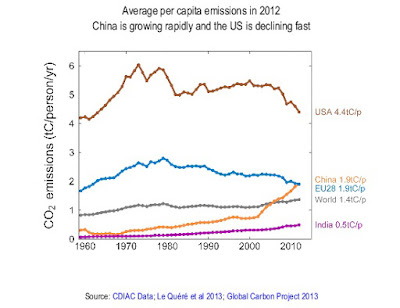 So like many arguments posed in this messy battle for the moral high-ground, it is self-serving, deceptive and false.

The fair share of global warming mitigation is for each country to clean up their own mess.

In other words their emissions reductions should be related to their historical contributions NOT their current emissions.

On this measure Europe, the US and China are not doing their fair share and have hoodwinked the rest of the world to contribute disproportionately to the global mitigation effort. Shame on them!
Posted by Grappy at 18:34