Seeking a fair GHG reduction target - Part 5: Who is responsible?

The Paris Climate Change conference COP25 is almost upon us. So this the 5th part in our series on "Seeking a fair GHG reduction target" is especially relevant. In part 4 we presented four porpositions which form the basis of a broad consensus on climate change action.

2. If global emissions are projected to produce global warming beyond the 2C degree target, then all countries have to reduce their emissions in the same proportion that they contributed to CC.

Propositions 1 and 2 recognize that those countries which have contributed most to climate chance should take the most action on abating emissions. You caused it, then you clean it up. If collective action is to be taken, then the fair distribution of effort is in direct proportion to each country's contribution to the problem.

Proposition 4 covers financial compensation for remediation. It recognizes that some countries who have contributed little to climate change face a disproportionate cost to mitigate its impact on their economies. The cost of such remediation should be borne by those countries that have caused the problems and in the proportion in which they contributed to the problem.

In this part of our series we focus on proposition 1 and determine which countries are responsible for the global warming we have experienced to date.

Who is responsible for our global warming?

The key measure for proposition 1 and indeed a component of each of the other propositions, is how much has a country contributed to climate change.
A country's contribution to climate change is a measure of the impact on global temperatures due to all the activities of the country including all emission and absorption of GHGs via power generation, industry and land use. It is not its current emissions rate, but its total emissions since industrialisation, and it needs to be adjusted for imports and exports. The country that imports products must bear the emissions used in their manufacture. So the measure we need is ; -


Each country's contribution to CC due to their cumulative emissions over time
adjusted for their use of land and for the impact of imports and exports.

This is not a simple measure and it is not readily available. However there have been a number of studies which have looked at this question. Most notably the 2013 paper by Mathews et al, of Concordia University titled National Contributions to observed Global Warming. The paper does not focus on GHG emissions or indeed GHG emissions rate, measures that we have found to be misleading. The study looks at each countries' cumulative contribution to Global Warming and calculates the impact directly as a change in global temperature in degrees centigrade. The Concordia University Paper (CUP) provides a baseline set of calculations for our measure and also ranks the countries of the world as to their contribution to climate change to date.

The table below shows the ranking of countries as provided in the paper. 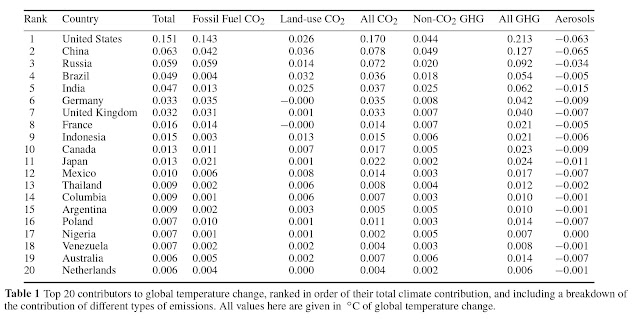 A key limitation of these figures is that they exclude the impact of imports and exports. This significantly distorts the contribution to CC of both exporters (eg China, Russia) and importers (eg US, Europe).

There have been a number of recent studies which have looked at this question. However their calculations are generally based on emission rates not on total emissions. Nevertheless they provide some indication of the type of adjustment that is likely when imports/exports are taken into consideration.  Boitier ,in his paper "CO2 emissions production-based accounting vs consumption: Insights from WIOD databases"  provides both a methodology for calculating the 'consumption emissions we are looking for together with tables showing the resulting changes in emission rates for arange of countries and for the years 1995,2000,2005 and 2009.

The Table for 2005 is reproduced below. 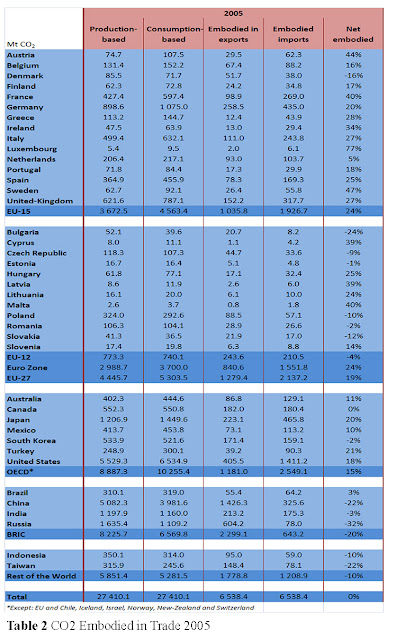 We can use these two papers to calculate the trade adjusted cumulative impact on global warming of the top emitters. In Table 3 below I have taken the results of Table 1 and adjusted it for the impact of imports and exports using Table 2.  This is of course simplistic as it uses the imports and exports at a single point in time to adjust the cumulative impact since 1800, but that is all I had to work with.
It provides a 'first estimate' showing which countries are responsible for climate change to date taking into account all the major factors. 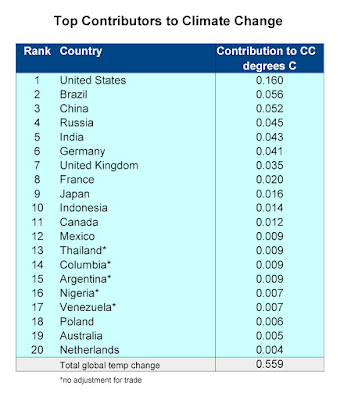 
While we have now adjusted, at least approximately, for the impact of imports and exports, there are other limitations of which we should be aware. The authors of the respective papers have themselves noted a range of assumptions in determining their results which need to be revisited and refined if the resulting calculations are to receive widespread acceptance. Moreover the figures have to be brought up to date. The tables above have used figures to 2005.

The conventional presentation of the top 20 emitters uses annual emission rates and ignores the impact of imports and exports.

Table 4 below shows the Top 20 emitters as 'conventionally' presented. 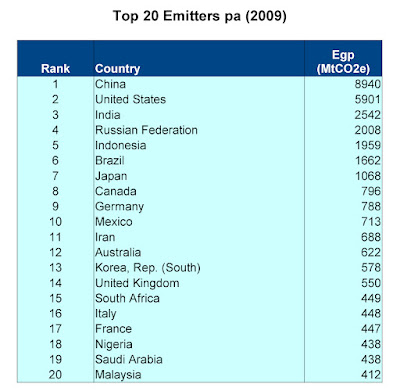 Comparing Table 3 and 4 we can see significant differences. Several top 20 annual emitters completely leave the top 20 contributors list (Iran, South Korea, Malaysia), and others not in the top 20 for annual emissions today have contributed significantly since industrialization (Columbia, Argentina, Thailand). China which occupies top position in the table of emitters with some 60% greater annual emissions than US, moves to 3rd position in contributors with a contribution of 70% less than the US. It is a similar story for virtually all the places.

Clearly by looking at cumulative contribution to global warming we get a different picture than if we look at just annual emissions. It is time for the global community to acknowledge that the focus on annual figures is misleading. It tends to serve the industrialized developed countries by understating their contribution to Global Warming to date. No wonder previous CC conferences have acrimonious disagreements between developed and developing countries. Perhaps a proper recognition of who has caused the problem can lead to greater consensus.

In the next part of this series we will use look at each of the 4 core propositions and derive a process for setting fair reduction targets.