With the upcoming Paris conference on Climate Change (CC) nations are starting to announce their reduction targets for the coming decade. Admittedly these are only starting positions as the conference invariably raises issues forcing compromises from most countries.

The selection of a reduction target is always controversial. Passionate CC adherents will always push for greater commitments from their, and indeed every, country. More conservative proponents will put greater emphasis on compliance costs, especially in light of current economic conditions.

This article is the fourth in this series "Seeking a fair GHG target". From the outset our objective has been to find a process for setting equitable Greenhouse Gas (GHG) reduction targets that would receive widespread acceptance.


In our previous posts...

In this journey we have come a long way.

In part 1 we recognized the core problems in reaching a target;-
In part 2 we looked at Reduction Target statements and found that the common measures used in these do not reflect a country's contribution to climate change. 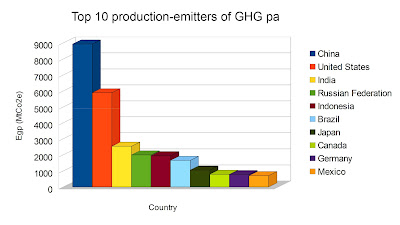 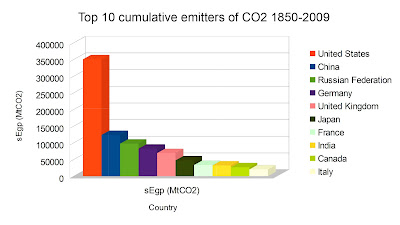 Clearly, the ranking of countries varies greatly depending on the measure used.

In short, consensus on reduction targets cannot be reached if measures are used that do not correctly reflect a country's contribution to CC.

In this fourth post we look at the essence of consensus and identify four propositions that will ensure consensus on reduction targets.

The essence of consensus

What is the essence of consensus when it comes to CC?

There have been many disputes between countries with regard to their reduction targets, but they break down to the following three issues; -

These are all valid arguments and consensus will not be achieved unless each of them is addressed in a way that is seen to be equitable.

Lets look at each of these and set some guidelines for addressing them.

Propositions for consensus on responsibility for CC

Climate change is just one symptom of humans utilizing resources at a greater rate than they are being replenished. For any advanced society to survive over millennia, they have to replenish all resources they use. This applies not only to the air we breathe but equally for all other resources we use; water quality, food supplies, the diversity of our ecology.

The basic tenet of sustainability requires that if we have emitted GHGs to the environment greater than nature will recycle, we must remove them. Moreover every country has an equal responsibility to remove their own excess emissions.

This argument leads us to the first proposition for creating reduction targets; -

While this proposition makes a clear obligation as to the extent of mitigation effort, it does not provide a timetable.

The timetable is determined by the stated, and generally accepted, goal of limiting global temperature increase to less than 2C by the turn of the century. We will revisit this limit and what it means for calculating the reductions for each country in due course. For now, however, we encapsulate this global warming limit in proposition 2;-

Propositions for consensus on 'free emissions'

No doubt the freedom to emit GHG enjoyed by the now developed world has contributed to their
standard of living. Countries now undergoing industrialization, China, India, Brazil, and countries that have not even commenced this path, most of Africa, cannot be denied the right to the same level of 'free emissions' to enhance their standard of living.
To compensate these 'developing countries' we have proposition 3; -


The application of proposition 3 is not straight-forward. Who qualifies, what is the quota, when does it apply, and when does it cease, are all valid questions we will have to address in the future. For the present it is sufficient to note that proposition 3 fully compensates developing countries with the same level of free emissions that have been enjoyed by countries that undertook industrialization some time ago.


Proposition for consensus on sharing the cost of remediation

Some smaller Pacific nations, face CC catastrophe. They validly argue they have not contributed to the problem yet the consequences fall on their country disproportionately.

It is only fair that those countries which have contributed most to CC should fund remediation.
While it may be possible to identify which countries are responsible and the extent to which they are responsible for CC to date, it is much more difficult to re-mediate the problem, and even whether remediation is possible. For example how do you stop the submersion of some pacific islands if/when CC causes sea levels to rise.

I have no answer other than to offer financial compensation. Those countries which caused it should pay compensation to those who have been damaged.

This leads us to proposition 4.

In practice this requires the establishment of a CC Compensation Fund on which countries facing the cost of CC can claim. The total amount to be contributed to the fund would be determined by how much victim countries can justify are their real costs. No doubt this can be problematic, but I will leave the justification to actuaries and the resolutions to judges. The amount contributed should be based on each country's contribution to CC to date.

Note that this contribution should be re-calculated periodically, so that as countries continue to pollute their contribution to the CC compensation fund should be adjusted.

Agreement on any issue can only be achieved if all parties feel their point of view has been considered and addressed. The core issues of the climate change debate have been identified and we have identified four propositions which address these three concerns.

2. If global emissions are projected to produce global warming beyond the 2C degree target, then all countries have to reduce their emissions in the same proportion that they contributed to CC.

In the next part of this series we will use these four propositions to derive a set of rules what can be used to calculate equitable reduction targets.