Given the need for global cooperation, the self interest of countries, and the voluntary nature of commitments, it is not surprising that comparing and ranking countries has taken a prominent role in negotiations for reduction targets.


Countries performing well according to these rankings can afford to justify lower reduction targets, while those identified as high 'polluters' are embarrassed into greater commitments.

In this post we compare the rankings of the top 10 global emitters using a number of different measures. We will start with the two most common measures used for ranking countries' emissions, E, the total emissions of GHG pa , and  E/c, emissions per capita per annun. In addition we will look at how these rankings change when we compensate for the shortcomings of these measures, in particular ; -

Climate change has been a hot topic for many years now so it is not surprising that extensive data bases have been created covering a wide range of measures. One would have thought that any question could be answered readily. Unfortunately, however, this is not so. While all the data relating to the common measures is readily available, the data on consumption emissions, on absorption rates and cumulative emissions is sparse.

In the following tables I have used 2009 as the baseline, as it was a date for which I could find the most relevant data. Even here I was restricted in that for the cumulative emissions I could only find data on gross production emissions of CO2 emissions, as opposed to CO2-e, and only dating back to 1850.  Nevertheless it helps to complete the picture indicating which countries have contributed most to the changes in GHG in our atmosphere.

Hopefully as greater emphasis is placed on the shortcomings of the common measures these gaps in the data will be addressed.

My sources for all the data presented are listed in the references section below.

Again just a few notes on terminology. I am using suffixes to differentiate between the different measures of GHG emissions.

Applying these we have four different measures of Emissions.

Each of these measures is on a per annum basis for a specific year. In all the following tables the year is 2009.

For cumulative measures, I use a prefix of 's'. For example , 'sEgp' is the cumulative gross production emissions of CO2 of a country, and in this case the period is from 1850-2009. 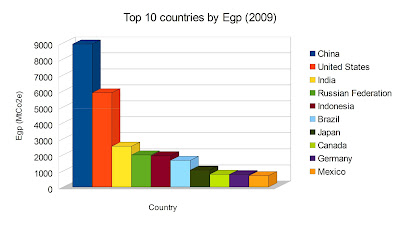 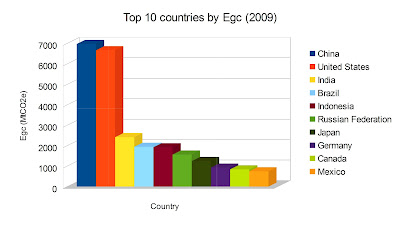 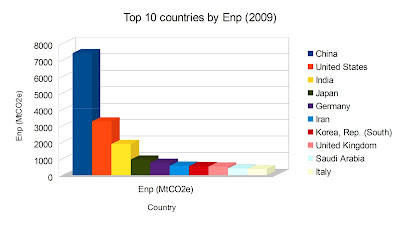 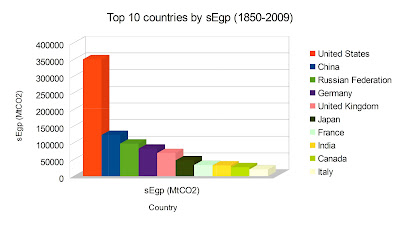 In comparing these four graphs, it is clear that the largest emitters by all measures are China and the US. However their relative contribution varies significantly. For example, while China is the greater emitter today in all per annum measures, on a cumulative basis the USA is significantly ahead.

Similarly the relative contribution of the major emitters varies significantly depending on the measure used. Again for example, while Brazil and Russia are 4th and 5th in gross consumption emissions ( Egp) they drop out of the top 10 when net emissions (Enp) are considered. Similarly once cumulative emissions are taken into account newly developing countries drop back in the field and the European countries move up.

The range of variables and the way countries perform differently on each, gives plenty of scope for vested interests to push a range of arguments.

Measures of per capita emissions

The table below shows the top 20 countries as measured by Egp pa and their ranking on four per capita measures;- Egp/c, Egc/c, Enp/c, sEgp/c. (Note that sEgp/c is obtained by dividing sEgp by the population in 2009. It may have been more accurate to use the average population over the measurement period (1850 -2009), however I don't have those figures.)


The table is sorted on sEgp/c, with US as the highest cumulative emitter at the top, followed by UK and Germany.  China with a large population and rather recent industrialisation is near the bottom, as it has not contributed greatly over the period, despite its high current emission rate.

BY glancing at the four columns it becomes obvious that these measures give widely different results as to the rankings of the top 20 countries.

This is further illustrated by the graph below. The graph shows the ranking on each of the four measures, of the top 10 cumulative emitters. 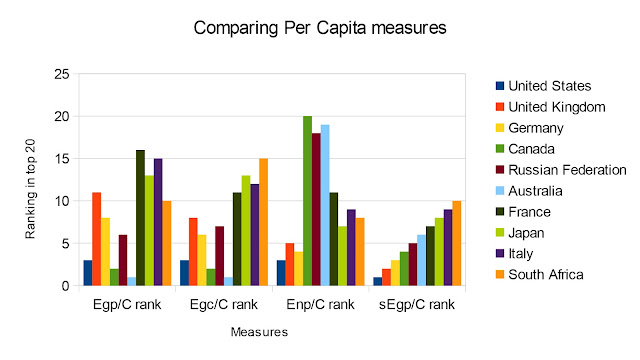 The graph again highlights the great variability in rankning depending on the measure used.

What is the point of this?

Measuring and Ranking countries as to their contribution to CC is important as we approach the next CC conference in Paris. A key first step in trying to reach a consensus on reduction targets is an appraisal of which countries are responsible. This then leads to proportionate commitments.

This presents a quandary. With so many different measures, resulting in widely different rankings what can/should we use? Moreover is there a measure that can serve as the basis for setting commitment targets and will be acceptable to all countries?