This is the 6th sixth post in the series: "Seeking a consensus on GHG reduction targets".

In earlier posts we suggested 4 propositions to derive 'Equitable Reduction Targets', ETR's for each country.


2. If global emissions are projected to produce global warming beyond the 2C degree target, then all countries have to reduce their emissions in the same proportion that they contributed to CC.
3. Developing countries are allowed a proportionate quota of 'free emissions'.
4. Countries which face the burden of climate change have to be compensated by those who caused it.
(For the full story so far see parts 1,2,3,4,5.)

In this post we will look at the implications of Proposition 2 and derive the Equitable Reduction Targets for the leading emitters.

Proposition 2: What rate of abatement to target by 2030?

The ceiling on 'acceptable' global warming has generally been set at 2 C degrees by the end of the century. This in turn puts an upper limit on the global emissions acceptable throughout the coming 85 years.

IPCC estimates that since the industrial revolution (~1880) up to 2013 about 2035 Gt CO2-e were emitted into the atmosphere. Given the vagaries of climate models the acceptable global emissions rate to achieve this limit is not certain. IPCC has set a Carbon budget of 3,700 GtCO2-e to limit warming to the desired 2 degrees with a 67% probability (See Reference 3 for a discussion.)

Given a global emission rate of 46 GtCO2-e pa (see Globe nears peak greenhouse gas emissions, says report), clearly continuing emissions at the current rate is not an option and would have us consume our 85 year budget by 2049. Global emissions must be reduced so that over the next 85 years the average per year is ~18.5 Gt CO2-e.


This is no easy task.

Global emissions have been increasing at ~2% per year over the past decade. This is despite efforts by  many developed countries. The biggest problem today is China. China is by far the largest emitter and continues to increase its emissions year on year. Indeed in its pledge to the Paris Climate Change conference it has only committed to 'peak' its emissions in 2030.

After China, comes India, another country with a large population which is only now entering its 'industrialization' phase. This is likely to lead to much greater emissions over the coming decades. Then of course come the rest of the developing world, each trying to lift the standard of living of its citizens, through industrialization, and leading to ever greater consumption of energy.

Without doubt there are real challenges here. On the other hand there are some small reasons for optimism. The most recent update on global emission rate projects a drop in global emissions(see Global Emissions Decline in 2015 ) It is most likely due to the slowdown in the world's economy, reflected in a reduction in China's output. If so it is but a small respite as the US is starting to really speed up after the GFC and will again re-start China's engines.

If we are to achieve the emissions budget what is a reasonable target for 2030?

Figure 1 illustrates various paths for achieving our overall objective. Each curve represents a possible global emission rate over the next 85 years that will ensure Global Warming is limited to 2C. 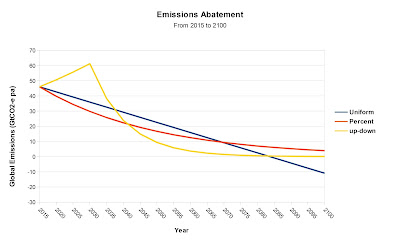 Of course the choice of a path is open to debate. One could argue that over the next 20 years new technologies will significantly reduce the costs of renewable energy, making abatement much easier in the future. This favors postponing emissions reductions to later. On the other hand it would entail higher risk, as rapid reduction without the desired new technology would be expensive and disruptive.

Without asking for miracles in technology I suggest a simple straight line. The advantage of this scenario is that it has a uniform decrease in world emissions stretching from now till 2100.  So year on year the reduction is the same. Given the relatively high global emission rate it does have the unfortunate property of requiring negative emissions for approximately 15 years. While that seems most unlikely today it is far from impossible in a future world. A world which has learned how to manage the carbon cycle to absorb more CO2 than it emits. There are many options for doing this including re-forestation of the earth, feeding phyto-plankton to increase their absorption rates, or indeed other active management processes.

I have used this as the Equitable Reduction Target for the following calculations. This is not to single it out in any way as the best solution. It simply represents the minimum consistent rate at which emissions can be abated and still achieve the 2C limit. If this is not achieved in any period then future periods must have greater reductions. In this sense it sets a threshold.

What does this mean for world emitters?

As covered in earlier posts, each country is responsible for abating their own emissions.  Equitable reduction targets are set in accordance with each country's historical contributions to CC.

So what ever the global reduction target it needs to be distributed across countries in the ratio of their historical emissions.

Table 1 presents the ERT of the 20 countries that have been responsible for the majority of global warming to date. The ERT was calculated by apportioning the required 10GtCO2-e reduction in global emissions over the top 10 emitters in the ratio of their cumulative historical emissions. The reduction target is shown in MtCO2-e pa as well as the % reduction required from the 2015 emission rate. (Note that the 2015 emission rate is not yet available so it was estimated from 2012 emissions with an uplift of 6% to represent the ~2% increase pa since then.)

The % ERT varies greatly across these countries because they have different historical contributions to the problem. The US which has been responsible for 22.9% of global warming to date, and threfore has to contribute 22.9% of the reduction by 2030. Given a global reduction target of 10 GtCO2-e pa , the US has to reduce its annual emissions by 2.9 GtCO2-e by 2030. Since its emissions in 2015 are 6.6 GtCO2-e pa , the reduction is equivalent to 35% of its current emission rate. The calculation is similar for all the other countries.

Table 2 compares these required reductions to the pledges made at the recent Paris Climate Change conference.

It is clear that the largest emitters, US, China, Brazil and the European countries have made pledges which fall short of their equitable reduction target. In other words they are shirking their duties.

Perhaps surprisingly India and Russia, two of the top emitters have made pledges in line with the ERT. So too have mid-range large emitters, Japan, Indonesia, Canada and Mexico. Closer to home Australia by committing a 26-28% decrease over 2005 levels is committing to significantly greater reductions than required by the ERT.

How correct are these figures?

It has been a long road getting to these results. So, are they accurate? Believable?

They are certainly not accurate in a technical sense. I have taken several shortcuts, estimates and made some extrapolations when data was not readily available. These have been done explicitly, so one can revise the calculations when more data is available.

Despite this I believe the overall import is reasonable and appropriately gauges the required reductions by leading emitters. This is subject to the proviso that so far we have only considered Propositions 1 and 2, and the ETR's require some adjustment after Proposition 3 is taken into consideration. These will be covered in the next post in this series.

The core propositions and the process for deriving the ERT, however, are more important than the numbers themselves. These I believe will withstand scrutiny. From the outset our objective was to derive a process for setting GHG reduction targets that would achieve consensus. Given what we have seen in Paris, the long-winded machinations, the verbiage, the convoluted wording, the limited binding commitments it is clear that the existing processes are not working. I write this despite the great fanfare with which the final announcements have been announced. That is all show,. Watch the news articles in the next few weeks. So I am confident that the process used to derive these ERT figures is a much more equitable than the prolonged and messy process used at Paris 2015.

What about the Paris conference?

The conference has now concluded with great fanfare. Pledges have been accepted and are to be 'legally enforceable'. Really? Well so it is said. I am sceptical.

Be that as it may, what are we to make of the pledges and the Paris conference. I believe the current set of pledges are nothing more than negotiated compromises. The largest emitters due to their bargaining power have managed to force the smaller emitters to accept a disproportionate burden in effect cleaning up emissions they did not cause. Not a very satisfactory outcome. The US, Europe and China should be ashamed of themselves!