A Prager video I saw some time ago (How to Fix the world NYPD style) proposes a foreign affairs strategy to make the world safer by punishing rogue states and petty dictators as soon as they step outside the widely accepted norms. It relies on "Broken Windows Theory" , that "maintaining and monitoring urban environments to prevent small crimes such as vandalism, public drinking, and toll-jumping helps to create an atmosphere of order and lawfulness, thereby preventing more serious crimes from happening." The number of broken windows in and around any community is an indication of the health of the community. In law abiding communities a broken window will be repaired quickly, as the owner has confidence that enforcement is thorough and a breakage is not likely to recur.  Whereas in communities without adequate enforcement, a broken window will be left broken given the investment in repair is likely to be wasted.

Looking around our Australian community I see many broken windows. Symptoms of disorder and lack of action on simple obvious and agreed social and political problems. 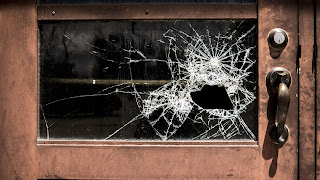 2. Governance
3. Values
The core foundations of an open society include freedom of speech and a free press. Both of these are being corrupted and no action has been taken to redress them.

Frustration with the lack of action by mainstream parties has driven the electorates to the parties at the extremes. However any rise in their representation will only make governing even more difficult.

The lesson from the Prager video was simple. Where the broken windows are repaired community standards are enforced, the community recovers and prospers. So too our Australian society will prosper but we do need governments to stop shilly-shallying and start repairing the broken windows.