Towards heaven or hell?

Like many families we have our disagreements. These range across all manner of topics from the trivial, "what to watch tonight?", the mundane, "It's your turn to take out the garbage?", to the abstruse, "What is more important Art or Science?". Yet one of the topics that seems to spark the greatest passion relates to something that should be decided by just examining facts. It is the simple question "Is the world getting better"? Are we heading towards "heaven on earth" or "hell in a hand-basket"?

Dismissing for the moment the specifics, I find it fascinating that our small family group with, let's face it, similar backgrounds and attitudes to most things, can disagree so passionately on this question. Worse still this disagreement continues despite multiple attempts, yes heated attempts, to reconcile our opposing views. The observation that people of similar backgrounds can have viewpoints so opposing despite awareness of the same "facts" is a topic worthy of further exploration but I shall leave it for another day.

For the moment let's take a look at the question "Is our civilization heading towards the light or to darkness?"

There are many reasons to believe we are going to hell in a hand-basket.

Ever-present danger
Every day our news media focuses in on a human tragedy of some type or another, be it a terrorist attack, a natural disaster or disease that has cut short the lives of our brethren. Daily we are confronted with threats of war, or disease or climate catastrophe. We are constantly reminded that we live on a finite planet with scarcity of food, natural resources, and increasing pollution. Our airwaves emphasize our vulnerability, an omnipresent danger, and the potential for disaster.

As individuals we face the risk of  misadventure, physical violence, onset of disease, or financial stress to our selves or our loved ones.

As a community we are vulnerable to accidents and incidents, climatic events floods, drought or earthquakes, terrorism, outbreaks of disease, social upheaval, political instability and even war.

On a global we have the catastrophic climate change, nuclear conflagration or global pandemics.

So it is not surprising that we would feel our world is an unstable platform with a 'monster' around every corner.

With some 7 billion souls to support our finite planet is straining under the load. The industries required to support this population are exhausting our natural resources and polluting our air land and sea. Our insatiable appetite for energy is generating greenhouse gases at a rate that is altering the climate.

Poverty and population pressures have fed into cultural conflicts creating widespread social unrest in the developing world. In the Middle East these have broken into multiple wars. These conflicts in turn have created vast numbers of refugees escaping violence and seeking better lives in the more prosperous regions of the world.  The sea of displaced are striving to re-locate into the wealthy developed world by fair means or foul.

Global terror networks seem to have infiltrated Europe and are bringing instability to a continent that had been at peace for half a century. China is playing games in the South China sea, Putin pushing boundaries around Russia at the very time the US has withdrawn from active leadership of the free world.

Nuclear weapons are spreading into less 'trustworthy' nations. Korea a failed state is already threatening its neighbours and developing delivery systems to threaten more distant foes. Iran never misses an opportunity to threaten Israel and it too is likely to have nuclear weapons in but a decade. So the potential for nuclear conflagration is increasing.

At the same time the arms industry is manufacturing weapons that give ever increasing destructive power to small groups or individuals. Who knows when a terrorist group or suicidal individual will obtain one of these to wreak havoc on a civilians. In recent Islamic terror attacks we have already seen the horrific impact of individuals and small groups hell bent on murder. Imagine if such attacks were executed with weapons of mass destruction.


By any objective assessment the world is in a sorry state. It seems the "towards hell" group should be easy winners.

Yet there is a compelling rejoinder. While the world may well be in a sorry state today, it was worse yesterday and the trend indicates it will be better tomorrow.

There are many facts supporting this thesis, but I will cover just a few.


The results as at 2015 are encouraging. Here are some of the highlights, you can check the rest here

Combating HIV/Malaria and other diseases

The UN MDG demonstrate the world moving to address the targets set in 2000. While most targets areas require more attention, there has been very real progress.

We can also gain a glimpse of the state ofthe world and its direction from another informative site  Our World in Data.

This site is well worth a close look. It presents data across a range of factors including Population, Health, Energy, dissected by country and over time.

Here are some graphs showing how the world has changed (and is projected to change) over time for for Poverty, Human development Index, Democracy, Fertility, Life Expectancy, and Population. 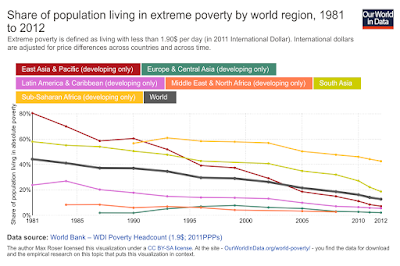 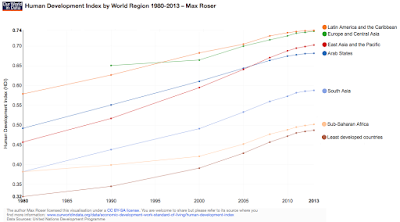 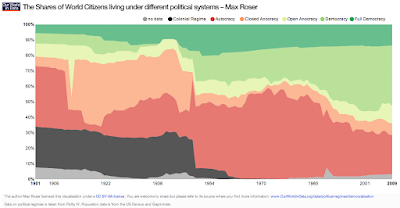 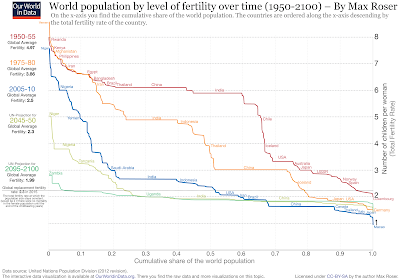 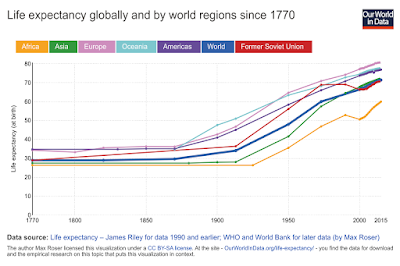 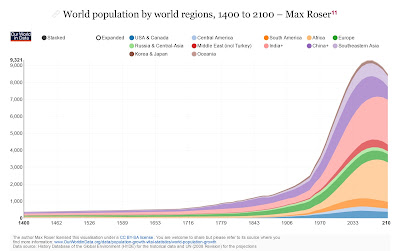 Of all the factors that one can use to gauge progress, Life Expectancy and Population are arguably the most important. Each of these measures is an amalgam of multiple factors. For example Life Expectancy is dependent on the availability and access to good quality food and healthcare. It indirectly 'measures' virtually all of the other factors that contribute to a successful society. its political systems, the wealth of its citizens, availability and access to food, shelter, healthcare, l as the efficiency of distribution of goods and services. Life expectancy can only increase if all of the factors contribute in a positive way hence it is ideal for measuring social health and over time progress. Life Expectancy for the world and each country in the world has shown pronounced growth over the last century. The world is getting better.

Similarly for World Population. Life expectancy in a world with uncontrolled population growth would be short lived. Life expectancy may increase for a while but then hit the wall. So it is essential for continued world progress that the world population stops growing. Figure 6 shows that despite increasing life expectancy fertility rates are dropping at a sufficient rate to ensure the population will peak somewhere between 10-13B around 2050 and then fall. This will ensure that the quality of life achieved for the wealthy nations today can be spread throughout the world in the next 100 years.

The evidence paints a picture of the world in transition, a transition for the better. Yes, I have cherry-picked, omitting some issues of serious concern. Areas where the change over the past 25 years has seen deterioration. For example terrorism, and nuclear proliferation. Taken in isolation they are of concern and could lead to catastrophe. Historically, the world has faced many such potentially disastrous challenges. The little ice age, would have been seen as heralding global catastrophe in the 16-17th centuries Similarly during our world wars who could have argued that the world was improving? Yet just a few decades thereafter the world had recovered and to living standards better than beforehand. If you look at the graphs above you can see a steady improvement despite all the short term catastrophes.

I picture our world history as a flowing river whose currents transport us towards that distant "better". Occasional shoals create turbulence and eddies that temporarily reverse our direction, but over time, inexorably, the great current of human development wins out and re-directs our flow towards progress.

So despite the very real eddies we have faced and continue to face today, human evolution is towards a world much better than today.

Optimists live in a better world


You can guess which side of the argument I was on. But, of course, I have not convinced my family and don't expect to.

We live in our own worlds believing what we wish. My world is a happier place looking forward to better times for everyone.
Posted by Grappy at 11:24