Fly in the ointment

With the Paris climate change conference in its second week, leaks are being fed into the airwaves of a draft 'deal' with momentous import ( eg see Officials from around the world reach climate change draft agreement).

The local press has been strangely silent on the internal machinations of the many hundreds of delegates working feverishly on the details of the 'deal' that is the highlight of these gatherings. No doubt the final encyclical will be announced with great fanfare in the closing hours of the conference. As always, it will be hailed as another great step in saving the world from calamity. As always, it will take many months before the real impact of the conference is properly evaluated.

Despite all the eloquent words that have been uttered, despite the well meaning commitments of the developed world, despite the positive vibe of it, this conference, like its predecessors, will not deliver to its hype. Not that the many delegate countries will not try, nor that they will not succeed in achieving their pledged reductions. No doubt most of the developed world will try, and will succeed to various degrees. But despite these efforts there is a 'fly in the ointment'. Indeed it is more of a mammoth than a fly. It is China. 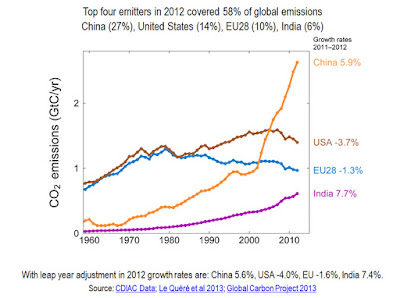 Figure 1 China is the largest emitter by far 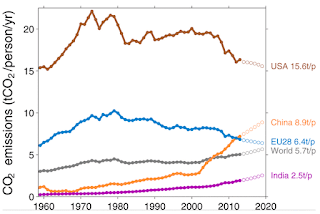 China is not only the worlds largest emitter by a large margin, but, perhaps contrary to popular belief, its per capita emissions are not developing world standard. China's per capita emissions are equal to that of Europe, and rising (see Figure 2 above). There is no validity to claims that it needs 'special treatment' because it is a 'developing' nation, so it should accept its fair share of the effort in reducing the world's emissions. 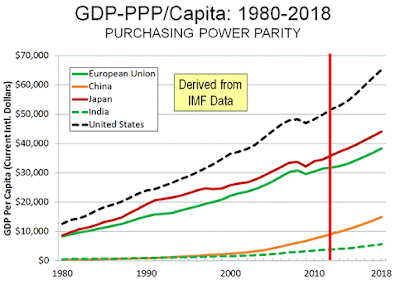 While China's GDP per person is significantly less than that of the US or Europe (see Figure 3 above), acting to reduce her emissions does not relegate her people to lower standards of living. Europe has demonstrated that a high standard of living can be achieved with a low carbon intensity. China must simultaneously reduce its emissions, grow the wealth of its citizens while maintaining its current per capita emissions.

Without China taking real and effective action there is no hope of the world achieving a 2 degree ceiling on global warming.

No matter how eloquent the words of that final resolution, without a commitment by the world's largest emitter they will be just hot air.