At the very time I was putting finishing touches on my recent post (see Free Speech is not Free ) a blatant example of the type of frenzied mass attack" i referred to in that post was taking place. The victim is Bill Leak, cartoonist for the Australian who has had to endure a storm of personal invective for daring to suggest that bad parenting may have had something to do with high rate of indigenous- juvenile delinquency. The offense it seems is that the aboriginal parent is stereotyped as drunk and uncaring. Not mentioning, of course, that the policeman also indigenous, is demonstrating the opposite. Let's not let facts get in the way of some moral grand-standing. 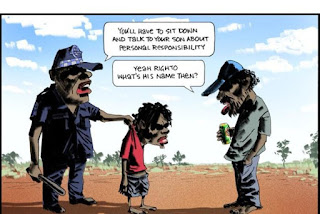 But I guess it highlights my point. There are too many commentators using personal attacks to shut down debate about genuine concerns in our society.

Leak has raised a serious issue and at least some in the media, The Australian and some Sky News commentators, are directing the discussion towards the very real causes of indigenous disadvantage; the breakdown of families that leads to the cycle of delinquency.

After the broadcast of the horrific images of the Don Dale detention center many are asking how has this come to pass, and why haven't we been able to redress this after so much has been invested over such a long period.

The attacks on Bill Leak demonstrate the failure by many to face some unsavory truths. The recognition that indigenous family life is in crisis, that and progress in redressing indigenous disadvantage will not be made without ensuring that indigenous families face the same consequences for neglect of children, domestic violence, alcoholism, and truancy that are the norm for the rest of society.


Of course a cartoonist does not need to take this lying down. And Bill Leak retorted in style with this one ; - 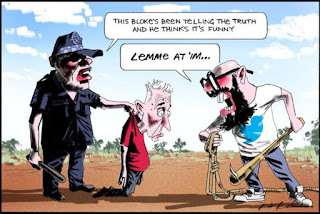 Leak being attacked by the media & social media lynch mob