As the Brexit shockwave reverberates through the world the soul searching and recriminations have begun. Why did it happen? What will happen now? The explanations are many and varied. Consider just these two articles from the one paper on the same day; -

I cannot recall any other time that we have seen such highly respected journalists differ so completely.

It is the same with the prognostications;


"This vote will trigger multiple crises — constitutional, economic and strategic. The upshot will be a weaker Britain, less influential and cast into domestic political turmoil. Europe’s future is at risk, with the prospect of a domino ­effect."

And some more visual commentary; - 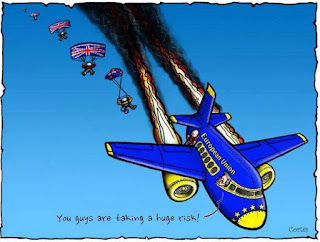 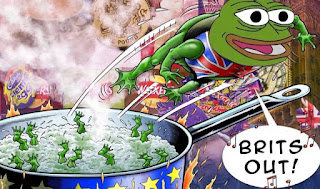 From The Conservative Treehouse 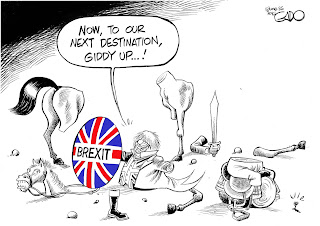 Some things, however, are clear and herald some salutary lessons for legislators;

But these are insignificant when compared to the single most damning unavoidable conclusion of the Brexit result; that the major parties are out of touch with their electorates.
By strongly advocating for Remain, neither the conservatives nor labor can escape the conclusion that the members of parliament, the elected 'representatives' of the people did not in fact represent a majority of their own voters. This is not a satisfactory state of affairs and presents a major challenge for the parties.

These inconvenient facts shake the very foundations of British politics. You cannot trust the polls and you cannot trust politicians to reflect your views.

Theatre of the absurd

Election times are at the business end of politics. This is where the die is cast and the destiny of the country is determined, well at least for the next short while. There is certainly no shortage of political material. The airwaves are full of it. Political ads by all manner of vested interests, daily proclamations by the party leaders, and a never-ending stream of analysis by the political commentators.

With so much around, what few words could I jot, that have not been written in various forms already?

As a 'lay' observer taking a helicopter view of this political battle I have been struck by the sheer theatre of democracy-in-action. A theatre of the absurd! What creative genius could have conjured up the mix of melodrama, chicanery, hypocrisy, dissembling that we have been presented over the past 6 weeks? It has been a dazzling, if depressing, spectacle and it is not yet over. My guess is we are in for an intense climax over the final 10 days.

Of the array of absurdities that we have witnessed consider just these ; -


Perhaps the organisation least expected to do so, the AEC has been misleading voters. Their ad covering the new senate voting rules states that you "must" number 1 to 6 above the line and 1-12 below the line. But this is incorrect, under a "savings provision" any number less than 6 will still be a formal vote, and this applies to votes below the line as well. Fore details listen to the Ray Hadley interview with Matthias Cormann). The AEC ad is linked below.

“It is true that we have less fiscal contraction over the next four years.”

He makes it sound like "larger deficits " was a good thing! And the media let him off with just a quiet chuckle instead of a full blown hissy-fit. You know the type of hissy-fit they had when Abbott ate an onion.

The above are just some of the absurdities that have been wrought in this election drama. It has been a truly unedifying spectacle, testimony to the adage that you may not like the sausage if you saw how it was made.

Check out the new page "On the Grapevine". It will provide some interesting articles/videos that cross my desk from time to time.

No matter which side of politics you favor it is in your interest to ensure that our government can function. While that includes extensive and considered debate of the issues of the day, it must include some ability to pass the legislation on which it gained office. Therein lies the problem.

Mandates are so yesterday!

Now I know mandates are old hat. That any person elected to a position can rightly claim they owe it to their voters to follow through on the policies they espoused to earn their supporters' votes. So it follows that every elected member of parliament feels justified in voting according to their stated policies even if the wider electorate would prefer otherwise.

Long gone is the old mandate concept that if a party that clearly stated its policies during the campaign was later elected in the house of reps with a clear majority, the other parties should pass those policies in the senate. Clearly that was abandoned some years ago, alas, with some severe consequences. Consequences the community is only now starting to take seriously.

So we have a problem!

The problem is this, populist issues can always sway a sufficient number of voters to elect to the senate smaller parties pushing a particular barrel. A number of these independent or small party candidates can bring legislation to a halt. This was exemplified by the current senate where the independents banded together to thwart the coalition's less 'popular' economic policies.

Acting in their own self interest these 'accidental' senators would generally side against measures they felt were 'unpopular' in the electorate, eg a co-payment for Medicare, or changes to the pension asset tests.

In the face of very serious economic tides it leaves the country vulnerable. We have already lost too much time and allowed the deficit to grow and fester.

That is no way to run a country.

What can we do about it?

It need not be this way. We still have a vote and we can use it well. While I have nothing against any of the candidates personally, in the senate, I suggest we collectively reject all single issue candidates and minor parties, all of them!

If you are a Labor voter then select the Labor candidates below the line and leave all others blank.

If you are a Coalition voter then select the Coalition candidates below the line and leave all others blank.

If you don't support either of the major parties, maybe , in the interest of the country, you should nevertheless vote for one of them in the senate.

I know the major parties have not nominated 12 candidates in each state, so select only the number they have selected. Your vote will still count.

If you wish to send a message to your party by all means don't select the candidates in the order in which your party selected them.

A number of coalition voters still upset by the sacking of Abbott will want to elevate Abbott supporters and 'punish' his deserters. (You can see the who supported whom here.)

What can this achieve?

If everyone followed this pattern the senate would reflect the House of Reps giving full control of both houses to the one party. In its most traditional sense the Senate would then become a house of review. The senate would see its job as scrutinizing legislation for unintended consequences not for blocking the legislative agenda of the government.

Yes, there is a downside to this. The one party could legislate whatever it wanted for 3 years.

Yes, there is an upside to this. The one party could legislate whatever it wanted for 3 years.

This has happened in the past and the country did not fall apart. All parties are in it for the long term, so they are fully aware that if they do not satisfy the country as a whole they can be turfed in just 3 short years.

Let the government govern. Lets see what they really do to drive the country towards prosperity without the Senate's foot on the brake.

Email ThisBlogThis!Share to TwitterShare to FacebookShare to Pinterest
Labels: election2016, how to vote, senate

Shorten's pre-election posturing to woo the voting public is replete with enticing claims; -

(the above all taken from Shorten's budget reply speech )

Appealing, bewitching words but effective only on those with a short memory.

As for the rest of us, we recall that just a few years ago Labor had two terms in government. Two chaotic terms, with three PMs, countless crises, woeful waste, disastrous decisions all leading to deaths by sea and debilitating debt. A far cry from the alluring image Shorten and the ALP are fabricating today.

How can one see the reality behind the facade? There is no better guide than the old adage;


"Do not listen to what they say, look at what they do"

Indeed let's take a look at what they did in government.

There are many accounts of the RGR period but lets just take a quick look at a couple.  Josh Frydenberg delivered an extensive list of ALP disasters in his speech to the house of representative on 26 Nov 2012. It takes but 5 minutes but well worth the jog to one's memory.


Or have a read through the even more exhaustive list below; - 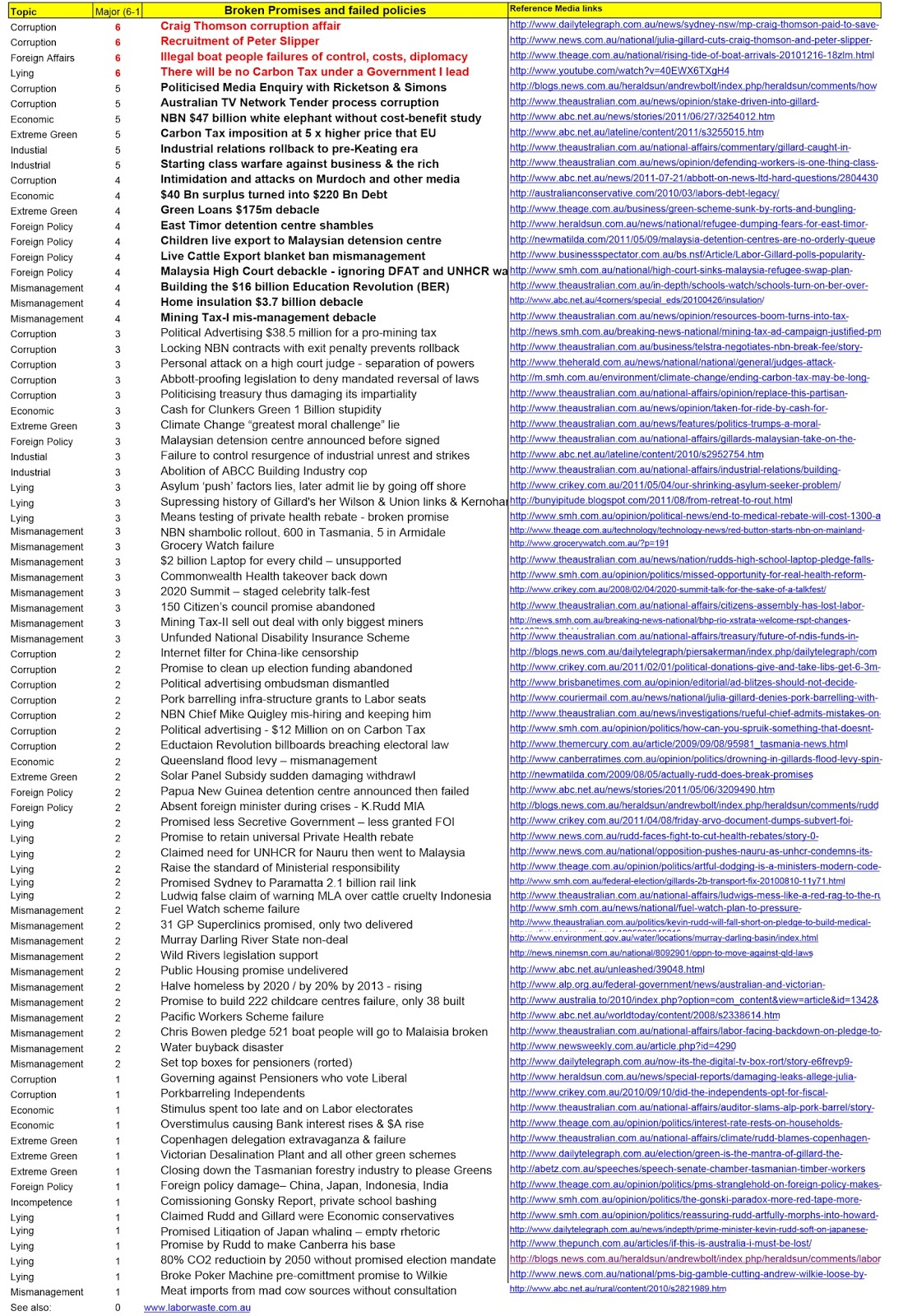 (This list was originally from a site www.labourwaste.com.au that is no longer online. So too many of the reference links are no longer active. Nevertheless the items are all too real with plenty of source material still available online to verify them.)

But this time it will be different!

No doubt in the face of this inconvenient history there would be loud protests that "This time it would be different". But of course they would say that wouldn't they?

So I suggest we don't risk it. Just rely on the old adage "Do not listen to what they say, look at what they do".