Who's the Fairest of them all? 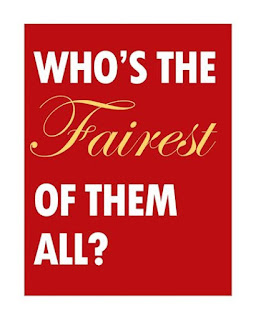 I have written about 'fairness' or 'social equity' many times already ( see Inequality in Australia is NOT rising ,Inconvenient truth on Fairness, The fairness test, A Wel-fairer system, 'Fairness' is in the eyes of the beholder ).  The Fairness mantra made quite a splash around the time of the 2014 Budget, and it was no doubt a success for the opposition. So it seems they are planning a re-run for the next election. All the signs are there with Shorten recently proclaiming that "inequality in Australia is at a 75 year high", a claim said to be 'patently false' by the way. This comes hot on the heels of similar claims of 'unfairness ' on penalty rates and even on education spending. No matter that the government, in a total capitulation to labor policies, proposed large increases in education spending, it was still not enough to prevent Shorten from unsheathing the unfairness dagger.  Most recently it is the inequity in the tax regime pertaining to discretionary trusts allowing the mega-rich to avoid paying their fair share.

So by now we can see the pattern. No matter what the government decides, Shorten sides with those who are in some way disadvantaged, then megaphones their concerns to the electorate painting the government as both heartless and favoring the rich. It has worked well for Shorten, at least as far as the polls show. Given a fickle self-centered electorate willing to identify with the disadvantaged, especially if they are to receive some benefits without their taxes being raised, and supported by a feeble media unwilling to present the counter side of what are such populist arguments, it seems this will continue to work.

I have been somewhat puzzled at both the electorate's and the media's acquiescence in this fallacious fairness dogma. How can memories be so short? Cannot people see where this fairness argument leads? Given that 20% of people already pay all the tax, that more than 50% of households pay no net tax at all, where does this stop? I can understand the naivety of youth. They have no memories of the socialist and communist experiments that have proven where the fairness dogma leads.

The idealized 'equitable' distribution of a society's wealth simply means that government takes money from those who earn more, and redistributes it those who earn less. This invariably removes incentive to earn more and by so doing the hard-working either coalesce in collective indolence or more likely, in today's world, simply move to countries that reward effort. This has a stultifying effect not only on the high earners but on all those who aspire to become so.


The inconvenient truth is that wealth creation is invariably linked with incentive and incentive goes hand in hand with some inequality.

The inconvenient truth is that wealth creation is invariably linked with incentive and incentive goes hand in hand with some inequality. I guess this has been written often enough, but certainly seems not to have sunk in. In today's society it seems we are always looking for shortcuts and those peddling magic elixirs are in the ascendant.

Perhaps it was Shorten's most recent calls of inequity that spurred me to be on the lookout, but I happened to come across a recent short YouTube video by Dinesh D'souza. I must confess I hadn't heard of him before, but given his forthright and sensible approach will look out for more of his commentary.

In his presentation he made a most compelling argument to counter Shorten's 'unfairness' mantra.


You can see the full video above, but the following is a trasncript of the core argument; -

.."It is always reasonable to ask (any person who wants change); What level if change do they want? "'

'Ok you want taxes to be higher, ok, how much higher?'

At what point are you going to stop putting your hand into my pocket in the name of social justice.
You are taking 50 percent, will you be content at 60?
Can I be confident that if I give you 60, I will never hear from you again?
Or will you then decided you will want 70?
Why can't you tell me what's fair in advance, before you take it?

In other words we are having these debates about justice yet noone is saying what is 'just'.
Socrates starts and says what is justice? Define it . Don't talk about it like an idiot. Define it first. Second you tell me at what level the pie should be cut, then we can discuss your idea of justice, but if your idea of justice simply translates to give me more, that's not justice."

So here is my challenge to Mr Shorten. Tell us what is the fair level of tax any individual should have to pay, no matter where his income falls, battler to mega-rich. Tell us what level of personal tax should any individual have to pay for you to believe that it is fair? Then we can understand your view of social justice and we can make our decision whether to vote for you.

I challenge all the media to ask him this very reasonable question. You keep asserting what is unfair, so tell us what you think would be fair?

Whenever Mr Shorten cries "unfair' ask him, "what is fair"?
Posted by Grappy at 11:25