I am sure you have seen it , but it may well have washed over you like many a heart-wrenching ad targeted to tug at our already over-stretched heartstrings. It shows a miserable daughter and tearful mother at the funeral of the father and husband who died presumably due to an accident in the construction industry.

Overlaying the scene is the message


"The last time a liberal government had their way with workplace laws one construction worker was killed every week, now the Turnbull government wants to bring back these laws"   - Authorised by Troy gray for the ETU (Electrical Trades Union of Australia)

While even a single death in the workforce is tragic, the cynic in me asked is this really correct?

Safe Work Australia provides extensive statstics on work place safety including a detailed report title "Work-related injuries and fatalities in Construction, Australia, 2003 to 2013".  The following statistics are taken from this report and the Safe Work Australia web site.

Construction worker deaths never at 1 per week over past decade 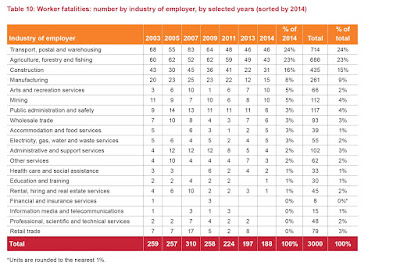 Contrary to the claim over the past decade fatalities in the construction industry have NEVER been one per week.

Similarly there is no basis for the claim that the rate of fatalities changed when Liberal government was last in power.

The number and rate of fatalities in construction and indeed other industries has declined slowly over the past decade irrespective of which party was in power. For example, the number of fatalities in 2005 under the Howard Liberal government was lower than that of 2009 and 20011 under the Labour governments of Rudd and Gillard. But the differences are small and unlikely to be statistically significant.

Nevertheless the claims by the ETU seem to be totally fictitious. Their ads are nothing but self-serving propaganda  and in the vernacular of the Trade Practices Act are guilty of deceptive and misleading conduct.  Union's have every right, and indeed, obligation to their members, to promote workplace safety but they also have an obligation to tell the truth.

On this occasion they are well wide of the mark and their claims are simply "lies, damn lies" not statistics.