The election result just announced, the senate not yet settled, Shorten still doing victory laps, yet the carnival moves on. The hectic activity of weeks gone by; the constant intrusion of political ads, news-grabs of pollies in factories and shopping malls, visibility vests, handshakes, rats being cuddled, incessant analysis by the chatterati, robo-calls, election posters, are gradually fading into memory. We are back to the daily grind. The electorate, judged by this single voter, is 'excited-out'. There has been too much electioneering, over too long a period and we all have our breaking points. 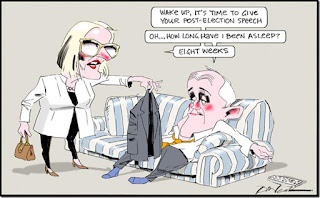 Yet curiosity compels questions. The post election review and recriminations have commenced and will no doubt play out over the next few months.

The Medi-scare campaign is lionized by the ALP and deplored by the LNP. Behind the scenes it is the the backroom boys, the campaign puppeteers, who will be evaluated in view of their results. But at front-of-house, the leaders must accept responsibility; Shorten the victor by smiles, and Turnbull tainted by under-performance.

Yet these questions are for the short term. More important are those of the future;
Alas que sera, sera. What will be will be. Keep watching.
Posted by Grappy at 10:45