The ALP is at it again. Yesterday, proudly with grins and great flourish, the ALP committed to spending of "$4.5 billion, over the forward estimates" and "reversing all of the (LNP) government's cuts over the next 10 years (totaling) some $37 B in spending provisions" to fully fund the Gonski education reforms.

Without even a hint of embarrassment, the pre-election spending spree is off to a flying start.

Aware that it is facing an increasingly skeptical electorate, still wondering how and when the last Labour bill will be paid off, the announcement was sprinkled with well repeated declarations that this is all paid for by savings that have already been announced. Yes, it all brings back images of Treasure Swan and his declarations of "Surplus in our time". Or the many spending commitments that were to be paid by the Mining tax. But lets suspend incredulity for the time being and assume that the new school spending will be paid for by cuts or by borrowing. Is such spending worthwhile?

No doubt education is seen by the ALP and indeed the electorate as a cause worthy of investment. Who can argue with the need for a country to educate its future workers, especially when it want to generate a society of innovators. Indeed, even if it is paid for by borrowing there is a poetic irony that the cost burden will be borne by those receiving the education. A case of accidental cosmic justice.

However such additional spending on Education ignores a critical inconvenient fact. The inconvenient fact that education expenditure does not correlate with educational outcomes. You can seem my earlier post Education spending scores "F" for the details but it is summarized most  simply in the following table. 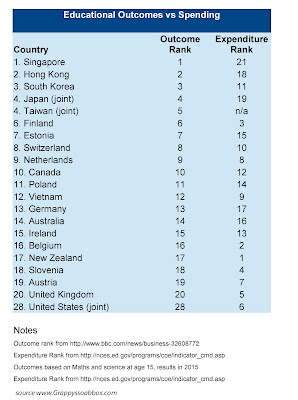 Any teacher will tell you this does not support increased spending on education! Well perhaps not a teacher but our proverbial "fair-minded lay observer" certainly would.


Education outcomes are the result of a complex melange of factors, spending being just one. Simply throwing money at the problem will not guarantee an improved outcome. In fact recent Naplan results show the opposite.

In any case, any objective look at the table shows that Australia is not faring well. It is well down the list in 16th place with many of our neighborhood countries beating us "hands down", and with lower education spending than ours. So lets stop throwing money at the problem but really go and find how to get more bang for the bucks we are already spending.

My advice to the ALP, save that money that you say "has already been saved" and pay off some of the debt you burdened the country with after your last spending spree.