The Bahrain declaration of religious tolerance

I shouldn't be surprised, but somehow still am, at how our media completely misses some significant world events, preferring to scream headlines at some topic-de-jour that is being covered by every other media outlet anyway.

The most recent such case is the Bahrain Declaration. Oh, you haven't heard of it? I guess that is the point.

It is almost three months ago now that the son of the King of Bahrain, HH Prince Nasser bin Hamad al Khalifa, on behalf of his father, signed the Kingdom of Bahrain Declaration, a declaration of religious tolerance, the first such document by an Arab leader.  In an era of widespread religious upheaval, where terrorists are randomly targeting civilians in the name of Islam, where any one not conforming to the strict tenets of Islam is the object of persecution in the Middle East and North Africa. In this era of intolerance, a declaration of religious tolerance by a Muslim leader, should be given wide recognition,. It should be heralded far and wide. Yet I came across it just the other by happenstance when a friend forwarded a link to an article on Simon Wiesenthal Center website . (see Bahraini King’s Declaration of Worldwide Religious Tolerance Unveiled at Historic Simon Wiesenthal Center Interfaith Event)

The Bahrain Declaration is reproduced below. It is certainly worthy of wide circulation, and the King of Bahrain should be lauded for taking this moral stand, especially given the personal risks he takes in doing so. 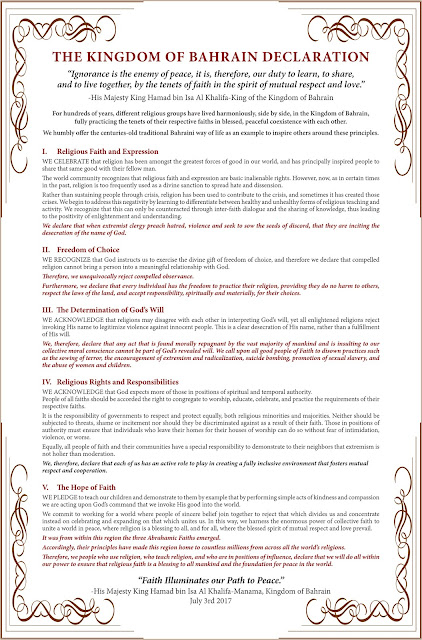 Yes I can hear the cynics; "What difference does this make?" Alone, isolated , unrecognized, nothing. But it is up to the free press to circulate and reiterate that the vast majority of people in the world are looking for a kinder, more tolerant world. By its focus on the problems of world, its drive to attract ears and eyes by dramatic appeal, our media megaphones discord and sows enmity. Good news rarely makes the headlines and events such as this declaration are relegated to the back pages. Yet I wonder, if it were the other way around. If stories of courage, success, hope were prominent, wouldn't the world be a kinder, more tolerant and happier place?