Funny how things creep up on you. Some words that were once acceptable, even in polite company, have not only changed meanings but have been made totally taboo. Words such as "golly wog", or "negro", or "abo" are now a real no no, and any one using them will be immediately branded a "racist" and shunned.

But really, calm down everyone, They are only words. They are innocent. Their use does not make the user anything but perhaps insensitive to mass criticism. Sure many words have negative historical connotations and their use can cause offence. So as always, "user beware"! 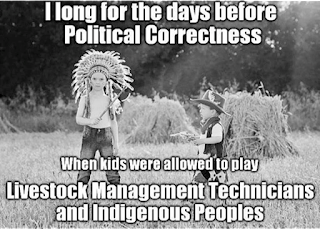 The passion for conformity however nowadays seems to have taken a dictatorial tone. Any expression of ideas contrary to the accepted norm generates explosive derision, a widespread communal attack on the offender and banishment from polite company.

We didn't see it coming!

Words are but one example of an insidious "political correctness" that has come to dominate many aspects of our lives. Our PC straight-jacket restricts the very words we are allowed to use, the ideas we are allowed to express and I guess by implication the truths we are forced to deny, or at least not express. 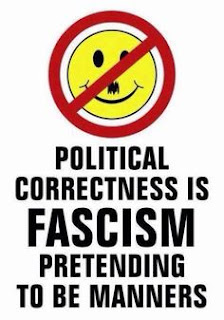 It is stifling open free exchange of ideas, stifling our free society. Without discussion, scrutiny and debate ideas stop evolving. No doubt that is the intent. To set boundaries around expression and to corral thoughts into the accepted norm to prevent radical ideas from taking hold.

We have seen this PC straight jacket applied with great effect. Consider the attacks on Sonia Kruger for daring to suggest Muslim immigration should be stopped. Incidentally, in a recent poll, this view was shown to be supported by half the population. Yet, being one of the first to call suggest "the emperor has no clothes", had her excoriated by the thought police, and even threatened with dismissal. So too Bill Leak for pointing out that aboriginal delinquency had its roots in the home, was attacked from all sides, again irrespective of the merits of his point. 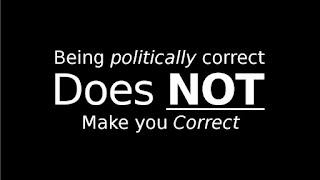 Almost in all such cases the thought police attack the transgressor personally, rather than debate the issue. Transgressors are labeled, homophobes, racists, deniers and worse. Labels serve to denigrate the individual so their opinions can be discarded as unworthy without even the need to provide a counter argument.

Our Universities are failing their role.

Hasn't this always been the case? New ideas are not accepted by the mob easily. Remember Galileo.

I don't think so. Sure there were periods in history where questioning accepted dogma was seriously dangerous to one's lifespan. Indeed this is true in many parts of the world even today. But in Western  democratic societies we had largely moved past this.

I recall in the 60s and 70s of my youth, no ideas were untouchable. On the contrary it was an era when many traditional views were analyzed, criticized and some were cast asunder. It was an era that saw great developments in Civil rights, Pacifism, Women's Liberation, and Gay Liberation. All movements born from free discussion and exchange of ideas supported and encouraged by Universities. Now University students and even academics unite to shout down and shut down discussion of "unorthodox" views.

Consider the attitude to the proposed Australian Consensus Centre on climate change. Despite an offer of federal funding, the University of Western Australia was forced by students and academic staff at the university to withdraw from hosting it. Why? It was perceived that the centre under its proposed head Bjorn Lomborg would give voice to unorthodox views on Climate Change. This is despite the very successful Copenhagen Consensus Centre also headed by Lomborg in Denmark.
Equally telling after the UWA withdrew no other Australian University stepped in to accept the fully funded Centre.

This unfortunately is not unique. Consider the disruption of a presentation by retired British Colonel Richard Kemp on "Ethical dilemmas of military tactics" in Sydney University. invaded by demonstrators including one of the university's lecturers to keep him from presenting his views. Views which were perceived by the demonstrators as favoring Israel over Hamas.

These are just a few examples of a sickness in our society that tries to shut down discussions which may seem uncomfortable.

It is a symptom of malaise, a society wanting to conform and ignore issues rather than fight them.

A vibrant developing and ultimately successful society has to give voice to all views. Let every point of view be given access to the media, especially the publicly funded media. Let every view be presented by those most capable of presenting the views. Then let the arguments fight it out!

The most important consequence of open reasoned debate is a gradual evolution of ideas. Ideas that once were in direct competition evolve to accommodate some opposing views and as a result receive wider acceptance. A society that handles such debates without explosive passion will always evolve. In the past Australia has evolved to become a very tolerant, equitable society that is the envy  of the world.

The unsavory fall into the PC syndrome is hopefully only a temporary setback. We can see signs that attempts to stifle debate are unsuccessful, whether it be immigration or SSM or climate change. The vote in the senate with the election of Xenophon and Hanson. shows that you cannot disenfranchise large minorities.  Now the major parties will have to win back these lost votes by accommodating their views.