As with education, Superannuation is another key election battleground with each party claiming they are making the system more sustainable by clamping down on unreasonable concessions to wealthy individuals.

Super is not meeting its core objectives to enable individuals to achieve self-funded retirement and reduce the welfare burden on the state.
In earlier posts (Not so super , Making Super work and Super Solutions ), I wrote at some length about the failures of our Super system so here is just a summary; 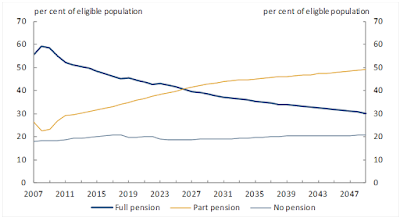 In short, the Super system is broken.

Inconvenient truth 2:
The policies of neither party attempt to remedy the failure of the system. Indeed by their changes they further threaten its viability.

Both parties have prepared a whole raft of changes to Superannuation. So whichever party wins the electtion there will be changes.  The proposed changes are detailed widely (see 2016 Federal Election: What superannuation and retirement policies can you expect? ) but here are just the core elements; -

As we are in the throes of an election campaign these policies are ill-defined and may be massaged given electorate reaction.

But the direction is clear. Both parties plan to clamp down on what are seen as overgenerous concessions to the wealthy and collect some much needed funds for the very real need for 'budget repair'.

But are they throwing out the baby with the bathwater?

I have not seen any modelling of the impact of the changes proposed by either party and I suspect we wont during the election campaign. The parties will avoid this scrutiny because their measures are likely to impact negatively on the effectiveness of super for achieving self funded retirement. By targeting high income earners some individuals will no doubt fall below the self funded threshold resulting in an increased number of retirees relying on the aged pension and further increasing the welfare burden on the state. Certainly the constant fiddling with Super has already undermined confidence in the system.

With a system already failing to meet its objectives what could the government have done? And how do the proposed changes measure up?

No doubt the treatment of Superannuation has been very generous to the very well off, and capping of the concessions is justified.  The LNP's introduction of an indexed cap on the tax free retirement balance is a sensible way to limit concessions.  If inflation indexed $1.6 m represents the single person threshold for self funded retirement then the government should encourage all contributions up to that point but give no concessions above that value.

For example consider the following Super rules as an alternative to those proposed by the parties.

Of the key measures announced by the parties only two stack up as being beneficial. The balance cap serves to limit tax concessions for the wealthy without affecting the goal of self-funded retirement. Similarly the removal of age and work status related limits on contributions encourages individuals to contribute to their super.

All the other measures impose limits that discourage savers and only undermine what little faith the electorate still has in Super as a source of self-funded retirement.

The grab for the glistening Superannuation gold is counterproductive. The industrious will be discouraged from saving, Aged Pension welfare costs will rise, and governments will no doubt have soon spent whatever few dollars they saved from these measures and once again be looking for funds.
Posted by Grappy at 11:50