With an ever increasing stream of News, especially in the lead up to the next election, our media are happy. There is no shortage of material to feed the 24-7 news cycle monster. There is an unprecedented range of serious issues to cover; -

Yet of all these serious issues the one that seems to take a disproportionate time is the machinations of the politicians. Our media commentators are sidetracked into the spurious, the tawdry, the scuttlebutt. Revision after revision of past elections and PMs. A book on Abbott by Savva held attention of every media outlet for weeks. Last week it was about Abbott Turnbull relationship and whether Scott Morrison was 'in' or 'out' of the 'inner circle'. All this to the neglect of in-depth analysis.

I accept that these personality politics are a valid topic for commentary and analysis. They are a great source of merriment and titillation for the journos and listeners alike. So coverage is relevant. But really !! How much time should be spent on the gossip as opposed to the serious?
This last week coverage of the Abbott 'intervention' and the Morrison -Turnbull relationship were incessant on virtually every news and political medium. It seems the journos 'fiddle while Rome burns'.

Where is the in-depth analysis?

Dominated by these distractions our 24-7 media makes no time for the real work of journalists to provide both broad and comprehensive coverage of topics relevant to society. There are many relevant topics that are begging for attention (eg see the dot points above). Let me also suggest a few more specific subjects that deserve scrutiny; -
Each of these question is relevant to our daily lives. Yet the news media pay scant attention to them.

Must present all viewpoints

These questions and many like them can be covered in many different media formats. But to inform the public any coverage must include all opposing viewpoints. Too often our media regards analysis as simply presenting one side of the story, often backed up by an 'expert'. A contrarian view is often not covered at all. Or even when it is, it is presented in unequal light through 'tricks of the trade', the order in which arguments are presented, being given unequal time, the words, tone and body language of the presenter and so on. That is simply advocacy and not journalism. The ABC has been particularly guilty of this approach, but it is really quite widespread on all our political commentary programs.

My preference is to always present the topic in general terms by a journalist then advocates of each side of the argument face each other and present their views. It is only when a proposition is tested by direct confrontation with its opposite that the viewer starts to appreciate the complexities and nuances in an issue.

This format has been used very successfully on America's PBS Newshour program where topics are invariably covered both in depth and without bias by presenting both sides of an argument and allowing the adherents to face each other in debate. I should also mention that the interaction of all the journalists is exemplary. No aggressive tone or body language, no interruptions at all, but respectable discourse. (see Raising the standard of Australian Journalism )

To a great extent the success of the PBS Newshour program reflects the code of ethics it sets as a benchmark for all reporting on the program (see below). 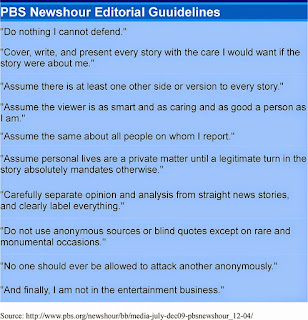 I could think of no better starting point for our own Australian media!