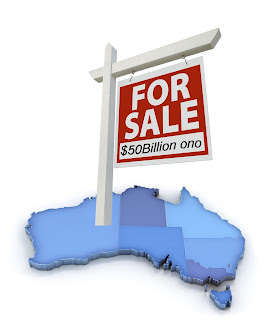 The recent rejection of the proposed sale of the Kidman property exposes Australia's skittish oversight of foreign investment. The Kidman property with some 1.3% of Australia's land area was up for sale at well under $500m (see Government refuse to authorise sale of Kidman). One could project the price of the continent at a mere $50 B. A Bargain!  OK, make it $48B, and we will throw in Tasmania.

Concerned about the vocal 'special interest' portion of its support base, read Nationals, the LNP Government has taken the prudent decision that the transaction would be contrary to the 'National interest'. For the government it was fortunate that the property included an area adjacent to the weapons testing range within the Woomera protected area, so it could, sort-of, argue security reasons.

Almost juxtaposed with the Kidman non-sale was the recent long term lease of Darwin port by the Northern Territory government, without any oversight by the FIRB. This transaction seemed to pass under the radar and was investigated, approved and announced virtually before anyone in the Federal government knew of it. I guess this is my impression, perhaps some did know and are now keeping mum

The proximity of these two decisions exposes the vagaries of Australia's management of Foreign investments. Not a satisfactory situation given the strategic value Australia places on overseas funds.

Australia has always encouraged free enterprise. As a large country with unbounded natural resources and a small capital base, it is ever hungry for investment funds. In agriculture and mining our industries have gained international prominence, no doubt assisted by foreign capital. A win-win for the investor and the country.

Nevertheless while there is widespread general acceptance that foreign investment is good for the country, from time to time some interest groups have raised issues. Be it farmers wanting to protect their market power, against a foreign owner of another Australian grown crop, or Unionists who want to ensure labour rates are not driven down by lowly paid imported labour, just to name a few. Despite these occasional vocal outcries, our limited subsidies, low tariffs and multiple free trade agreements are testimony to Australia's total commitment to free trade.

What then is the role of the FIRB? What types of investments are not in our national interest? Why would the government ever interfere to prevent a foreign entity from purchasing an Australian asset?

So what is the national interest?

The rules whereby the FIRB gauges the national interest are intentionally vague. They give virtually total freedom for any government to reject a transaction.

As stated in the guidelines; -

"The Government determines national interest concerns case-by-case. We look at a range of factors and the relative importance of these can vary depending upon the nature of the target enterprise. Investments in enterprises that are large employers or that have significant market share may raise more sensitivities than investments in smaller enterprises. However, investments in small enterprises with unique assets or in sensitive industries may also raise concerns." - Australia's Foreign Investment Policy

The guidelines then proceed to describe the criteria by which applications are judged.

I will limit myself to just a few comments, you can read the full text here.

These cover the, more or less, explicit rules on foreign investment.

How have these rules been applied?

Here are some press articles/releases relating to some recent FIRB decisions;-
The vast majority of FIRB applications are approved and the most common reason for rejection is Competition.

Once a buyer and a seller have agreed on a transaction there are many vested interests to see it go through, so it takes a tough stance by any government to reject an application. Therefore every rejection seems to get far more attention than an approval.

However not all approvals are accepted by the community. The recent Darwin port lease has had repercussions all the way to the White House, and its reverberations are still being felt in government. I would suggest "watch this space".  This however is unusual.

Most objections come from vested interests. They are often supported by a vocal outcry from the 'man-in-the-street, who does not gain directly from any sale and looks with suspicion at purchases of our daily brands by overseas interests. "Why would the overseas company buy this if it wasn't worth the money?" "We will only end up paying more for the goods."

These arguments may have an element of truth, but transactions carry a risk for the purchaser too, so as a general rule I would just let free enterprise work.

However I do perceive some problems. There are three areas where weak governments fail to reject transactions that plainly conflict with, an admittedly broader view of, our 'National Interest'.

1. Strategic Assets
The National Security criterion is not generally applied to cover assets which could be vital in the unlikely event of a significant natural disaster or even war. In such a situation Australia has to retain the means to support its citizens. This consideration should ensure that Foreign companies cannot control any component of the infrastructure required in such an event.

The recent lease of the port of Darwin is a blatant example of poor strategic thinking.

Here is another example, that may fall into this area. Consider our supply of oil, a vital commodity to keep our economy flowing. Over recent years a number of oil refineries in Australia have been closed by their foreign owners, leaving Australia dependent on imported fuel largely from Singapore. Today Australia has just 4 oil refineries with a capacity <500,000 barrels/day about 50% of the daily usage. This cannot be strategically sensible. What if something happened to disrupt the delivery of oil from Singapore. I don't know the impact of a sudden halving of oil available to Australia, but my guess is it would be severely debilitating.

Maybe this is not just the result of an FIRB problem, but I suspect it started as one a long time ago. Poor decisions to protect strategic assets have consequences many years into the future, so governments have to take a long term view. Unfortunately this is not one of their strengths.

I am not aware of other situations like this but I fear there are many.

If this was proven it should be a valid argument to justify rejection on Competition (Market Constriction) grounds. This perspective can apply quite widely. Many agricultural producers have been purchased over the years by Japanese and Chinese companies. No doubt each of these companies are trying to control their supply lines to ensure quality and price continuity. But it can be against Australia's national interest if it limits access to all other Australian companies into the foreign markets.

This potential impact of an investment is specifically covered under the Competition clause above. However it is used very sparingly.

Trade is a two way street. Any trader knows that you do not bargain away anything that has a value without gaining some pay-off from the other party. It is an item to be negotiated. Yet our trade conditions are unbalanced.

Our inclination to provide open market access to the world, has us leaning too far. We are offering countries conditions in their trade with us, that they do not offer to us. By doing so we are providing something of real value, access to our markets, without receiving access in return. This is hard to rectify after the event. What is the incentive for a country to provide access to markets to our producers if they already have access to ours.

For example we allow Chinese and Japanese corporations to purchase land assets in Australia while Australian companies do not receive the same rights in China and Japan. Of course this does not only apply for land. It applies to every market segment; airline routes, education, agriculture. Australia should restrict access to any of Australia's market segments to only those countries who provide reciprocal access to their corresponding market segment or a negotiated alternative market segment(s). It must be a two way street.

It is not in Australia's long-term national interest to give-away market access without receiving market access in return. Therefore Reciprocity should be a part of the National Interest test when evaluating FIRB applications

It is singularly appropriate for Australia's governments to maintain the 'open for business' leaning in their evaluations of FIRB applications. This has served Australia well over the years.

However there are three areas where the rules applied more rigorously;-

Any tightening of foreign investment rules is not easy. There are many, powerful, indeed voting, vested interests. Nevertheless without the addition of these three criteria is our National interest really protected?